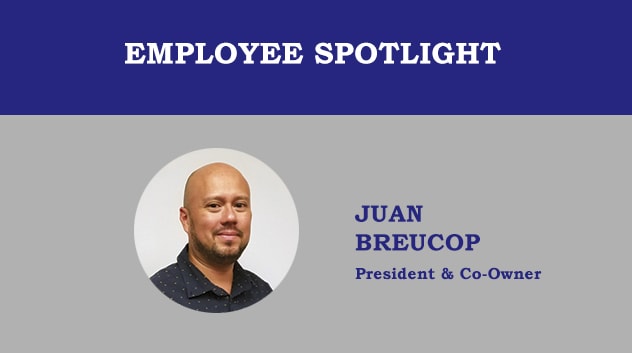 inExhaust™ began when Juan and his business partner, Vice President & Co-Owner Mike Rodriguez, established the company in the early Spring of 2016. Incorporated in March of the same year, Juan and Mike then hired three employees and moved into their current building. Three and a half years later and the company has grown to 29 employees.

Juan’s history in the industry began when he was hired to work production for GT Exhaust, a similar manufacturing company. GT Exhaust was later acquired by IAC Acoustics, which closed the doors of their Lincoln plant in December 2015. The closing of the plant and subsequent loss of jobs for many people inspired Juan and Mike to begin creating inExhaust™.

Starting in production, Juan has worked in many areas of the industry including purchasing, inventory, scheduling, and sales. He enjoys manufacturing and all the moving parts involved. He thrives on innovation and making products better. This is what has kept him in the industry for over 17 years.

The biggest challenge he faced was starting a company from the ground up. With competitors already well established, it was difficult to find funding sources willing to take a chance.

While Juan is proud of all his accomplishments, what stands out most to him is achieving ISO 9001:2015 certification in the first three years of business. Recently, inExhaust™ passed their recertification with flying colors.

Juan credits the success of the company to his faith, his business partner, employees, and the support of his family. His vision for inExhaust’s future includes continuing to grow the company, make better products, and keep innovating.

Juan enjoys spending time with his wife and two children, is a BMW/Porche/Watch enthusiast and in his spare time works on projects at home.